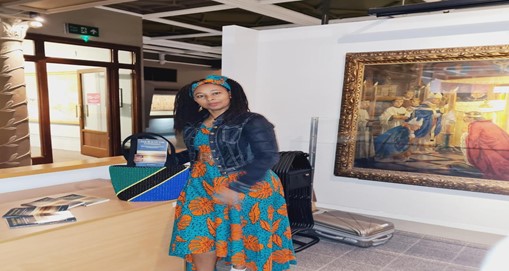 According to UNESCO there estimated 130 million girls between the ages of 6 and 17 are out of school. 15 million primary School aged girls will likely never enter a classroom in their lifetime. This was taken in 9 July 2018. It breaks my heart so much to know that this kind of behaviour and injustice is still existing in this time.

I was born and grew up in Africa, in a beautiful country called Tanzania. A country that any child will wish to grow, because it has so much to offer, from the morning when you wake up the big trees and flowers that you see outside they gives you dream, peace, hope and assurance that one day I will be able to grow and  become like that big tree or flourish and blossom like that flowers.

In 1990 I was 7 years old it was the time when I was supposed to join primary school, but I was told that I cannot join school because how to handle house chores so that when I get married I will be good wife. As young as I was it pained me so much and at that point of time, I realised that the dreams, aspirations and hope that I had  of becoming someone significant in the future was taken away, completely ripped away from me.

Do not underestimate the power of hungry girl:

There are so many reasons to why girls are denied education, and one of them is the fact that they say, girls are not capable and not cleaver enough to go to school, but this is the big lie, it is a propaganda that does not have any truth in it. I will prove it in the following paragraph:

In 2003 I turned 19 years old but still, I wasn’t able to read or write because I have not been to school all this times, I was working as a house girl. The same year my boss whom I was working for decided to reward me for my hardworking which was to take me to school and not just a school to start primary no! She wanted me to start SECONDARY SCHOO (Year7).

When I started year 7 without knowing reading or writing, it seemed impossible but, because I was so much hungry with Education, I persevered and gradually thing started to change. In two years time, I was able to read, write, do national exams and even knowing why I was in school. I have to say. It is remarkable that, through faith and hope that I had for a better future I defied the odds.

With no formal primary education, I managed to obtain a Secondary Education and become a graduate and associate member of the Association of Business Executives. In 2018 I managed to publish a book called the ‘’THE BOX OF THE COVENANT’’. I am now continuing to pursue other aspirations making sure that I give back to the community what I was given (Education)

Why is so Significant to give Education to Girls.

There proverb which says ‘’ if you educate a boy, we educate one person. If we educate a girl, we educate a family, and whole nation.  By giving a girl an access to education, you are ensuring the future of her children because you know that she will take her children to school as well, because she knows the importance of Education.

When you give girls education you are basically rescuing their dreams and their lives. Since they will be in School, they will escape early marriage so as early pregnancy which causes lot of death to girls in so many developing countries. Girls who received education they are more aware of what is happening in their community and so it can be easy for them to involve themselves in bringing positive change in the community or the society they are.

When you educate girls, you give them confidence which can help them to be able to participate in Economic, political and social discussions, and in decision making which can leads in promoting productivity and effective government. Girls are so quick in picking things and doing them very well. If a girl want, something, she will move mountains to make sure that, she gets what she wants. Girls have an extra-ordinary power within them, if they use it well, they are unstoppable.

My message to every Country, Society, Community and families, if we want this World to be a better place for everyone let’s come together and give Education to girls because it will change so many things.