REMAINED CONNECTED THROUGH FOOTBALL THEREBY SAVING OUR SANITY THROUGH THE PANDEMIC. By James 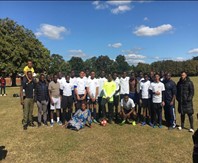 My Name is James, and I am currently a full time A-level student. Around 2 and a half years ago my friends and I were in general conversation and one of us posed a question. “Why don’t we start a football team?” A lot of us had been playing football together since primary school, we also had older family members and friends that used to play together with us. The question received a resounding “yes” answer.  We therefore got into a venture of searching for a league that would accept us. We found a league that was best suited for us which ended up being Reading district Sunday league. We applied for a place within the league and were then lucky enough to be offered an interview for the league which some other team members and I attended along with the chairman, Thomas. The interview went well and a few days later we were offered a chance to play in division 4 of the RDSL.

Some months went by from the acceptance in June of 2019 to our first league game in September of the same year. Prior to this a few of the lads in the community had also joined our team, so we had a full squad coming into the season. We started the season with a bang and won 7-2 against FC Whitley wood. This was secured from a hat trick by Stephen who ended up being our top scorer in the 2019-2020 season and narrowly missed the division’s top scorer by a few goals. The contribution from him, that of all the squad and our supporters resulted in us seeing promotion to Division 3 where we are now sitting at 6th position (middle of the table).

We are indebted to organisations such as Utulivu Women’s Group and the Reading West SDA church under the leadership of pastor Trevor Thomas which have definitely helped us during this time of financial uncertainty. Individual contributions from one of our managers, Andrew, helped us to obtain kits that are a requirement in the league, we have also had contributions from Thomas, Baraka and Samuel, just to mention but a few; towards the payments of other fees.  All these has given the boys people to be inspired by and strive towards giving back to the community. 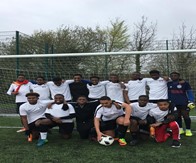 The year of 2020 was obviously a tough year for everybody because of the spike of the Coronavirus pandemic within the UK and the world at large which has continued into this year 2021. As we all know many people and at large Men have struggled with maintaining their mental health because of the current events. One of the ways in which this team has helped during these difficult months is that we have all been able to contact each other through social media and especially online gaming platforms, such as PlayStations. The team has created a sense of brotherhood which allows us to connect through games such as FIFA that all of the boys could testify to and say that it has extremely helped us obtain some of the happiness that football provided for us before the lockdowns. For example, on the 16th of February 2021, the lads played a pro clubs football match between themselves which resulted in a lot of humour and a competitive nature being put on display. This allows us to express ourselves as much we can in an environment that is non-judgmental, safe and not detrimental towards our health or the health of those around us.

I hope that the R number will continue on the downward spiral and bring an end to the lockdown so that we can hopefully go back to playing consistent football for Reading West FC. Thanks to Utulivu Women’s Group and others for enabling us to remain connected though apart through the pandemic. This has saved our sanity even as we work towards good grades for our exams results.